Hip hop and RnB fans, the Palace of Auburn Hills is proud to present one of the ultimate events of the year! That’s right, it’s The Party Tour, featuring the colossal lineup that is Chris Brown together with 50 Cent, OT Genasis & Fabolous!! It’s all happening on Friday 7th April 2017 – tickets disappearing FAST so don’t delay in getting yours!!!

Breaking into massive prominence in 2005 with the smash hit single “Run It!”, the multi-talented singer, dancer and artist has seen sales of over 10 million albums across the world. He’s had six No. 1 singles, and has received over 40 awards, including a Grammy, the Billboard Music Awards for Artist of the Year, Top R&B Artist, and two MTV Video Music Awards for Best Male Video and Best Choreography.

Also performing is 50 Cent, one of the biggest names in rap music today. Fitting firmly into the “gansta,” genre, he released the iconic album “Get Rich or Die Tryin’”. Featuring production by Eminem and Dr. Dre, it was one of the most talked-about albums of 2003!!

In support of the superstars is Fabolous, also referred to as F-A-B-O (or Fab). Grammy-nominated and platinum-certified, the hip-hop star is known for singles such as “Make Me Better,” “Into You,” and “Breathe,” and has collaborated with a whole host of massive artists including Rihanna, Trey Songz, Ne-Yo, Chris Brown and Nicki Minaj.

Last but certainly not least, its opener O.T. Genasis, the Atlantan hip-hop star who went viral with his first single “CoCo,” shooting up to YouTube views of over 200 million!!

What are you waiting for?? Get your tickets to see Chris Brown TODAY!!! 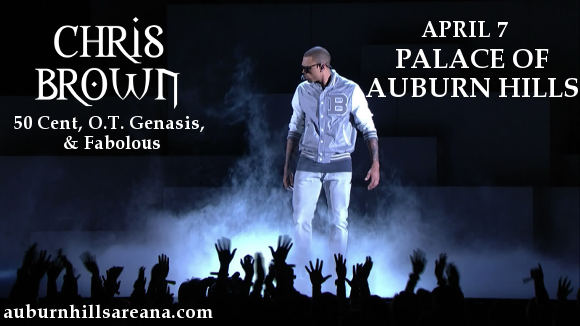