Modern hip-hop fans, take heed; the unforgettable superstar Chance The Rapper is coming to Palace of Auburn Hills on Thursday 18th May 2017 for a night of high-energy entertainment! Hit the “Buy Tickets,” button above – but hurry, tickets won’t last long! 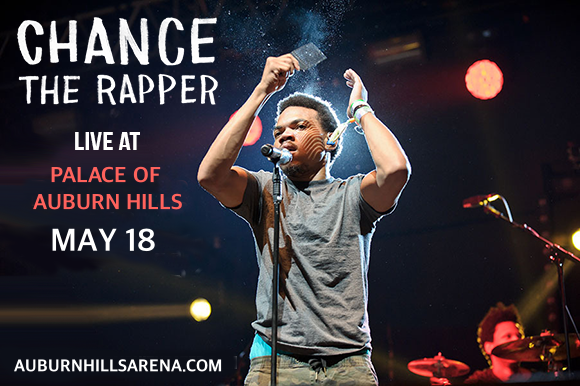 Starting out early, creating his first mixtape in high school, “10 Days,” (written during a 10-day expulsion from school) was uploaded in 2012. It’s fresh upbeat melodies and jazzy rhythms immediately caught the attention of Forbes magazine, who featured it in the publication's Cheap Tunes column. Also interested was Childish Gambino, who Chance opened for during his 2012 tour of America!! The rising star broke into the mainstream with his 2013 mixtape “Acid Rap,” which received vast praise from audiences and critics alike. Despite having nothing but mixtapes released online, Chance The Rapper became popular enough to perform at Lollapalooza Festival in 2013.

Last year, he dropped an unexpected mixtape, entitled; “Coloring Book,” featuring massive guest appearances from Kanye West, Justin Bieber, and Future!! Debuting at number 8 on the Billboard Album Charts, the single "No Problem," which featured Lil Wayne and 2 Chainz, charted in the Top 40. The album received huge praise for its incorporation of gospel, with Financial Times calling it an album "that places gospel choirs and jazzy horns in a modern setting of Auto-Tuned hooks and crisp beats”. The album helped Chance The Rapper earn 7 Grammy nominations, and is the first streaming album EVER to win a Grammy!!

What are you waiting for?? Book your tickets to see Chance The Rapper TODAY!!